If there is a better place than Vermont for a horse show in the scorching summer months, I certainly haven't been there.  The mountains provide an ideal backdrop and once you run out of roaming data approximately 90 seconds into your trip, the lack of internet/texting capabilities will guarantee a horse show gleefully devoid of contact with the outside world.  Wondering what's going on at work?  Keep wondering!  Curious about tomorrow's weather?  It's a surprise! 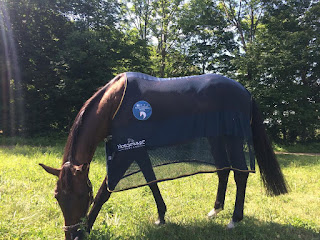 TT was a good boy during his schooling ride and earned his grass.  Note his fancy cooler.  I cannot reveal my sources but someone knew I really, really wanted a WEF cooler and procured one for me through entirely legal and unpaid means.  My friends are awesome.  After the grass I decided to take TT for a walk around the show grounds, feeling pretty swishy in our fancy cooler.  You know how they say the great thing about horses is they keep you humble?  "They" are right.  We got the a bridge crossing that had some kind of horse show/street urchin children throwing rocks and TT decided this would be a great time to rear and spin and run.  Bad news:  he got loose.  Good news:  a much saner horse behind him was not loose and allowed me to grab FF _ucker by the fancy scrim and chastise him.  Note:  I do not hate children but I do hate these children's parents.  Unattended poorly behaved children at shows should be allowed to be turned into the horse show office like loose dogs where they have to be reclaimed after paying a fine.  Or to tent 13, which appears to be where dreams go to die.  I understand not having a tent 13 because of superstition; I do not understand having the creepiest tent on earth set up as #13 to perpetuate the superstition.  That looks like the unluckiest place in the history of the world.  Admit it, if someone told you there were dead bodies in there, you would simply nod your head and agree. 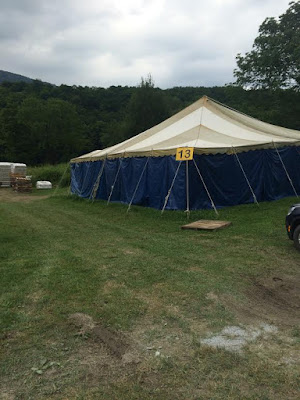 Tucker was a really good boy showing with the trainer the first day and jumped the water without too much of a fuss.  Unfortunately, there was a bicycle seat malfunction the second day resulting in a broken limb for the trainer, so a really fabulous rider in the barn showed him for me (thanks, Louisa!).  For the weekend, it was on me to ride.  Eeek.  I decided to pull on my big girl pants and ride at the top of my comfort level.  Psych!  I did the .65m like the sissy I am.  The first day I rode too conservatively and had time faults (smallest surprise ever to anyone in the history of he world).  The second day I generally rode pretty well - we went forward, we stayed straight, my position looked surprisingly stable and I have an epic Missed-it Monday style photo from the jump where I thought an extra stride would be helpful.  It was not.  At the start of the course walk, which I conveniently skipped, the last fence was set going the wrong way and I heard the gate guy say it wasn't on the course.  This meant I did not jump it until long after I had pulled up and had a conversation with some people in the bleachers about it.  We circled back and jumped a beautiful jump, after which the announcer politely said "4 jumping faults and.... well, a lot of time faults."

At our next show, I believe I am being forced to stop being such an epic wimp and try the .8m, which I am fine with.  TT is actually easier in many ways in the show ring than everywhere else in that he has his own motor, but it is such a different feel that it takes some getting used to.

The highlight of the horse show may have been explaining the origin of TT Tucker's name to a new barn mate and having a neighboring person in warmup overhear it.  She looked at us with genuine disgust, was horrified to find out I kept the name and picked a different jump farther away from us to school over.  Good times.  Other highlights include the Mexican food... and the garlic bread.  And the ice cream.  And the grilled cheese.

One of the fun parts of this horse show is it is set in a quintessentially New England town with smaller motel and houses for rent.  I stayed at a combination of the two in my own little hut.  As someone with 3 shared walls at my condo in Boston, it's always nice to have some extra breathing room. 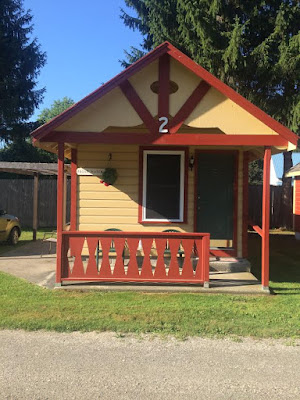