Scene:  you're walking into the ring for the sole class you will be showing in at WEF.  It has been 18 years and 15 pounds since you showed here.  These 6 weeks are the most expensive 6 weeks of your life.  You take a deep breath, walk in the ring on your mellow horse... and then he spins 180 degrees and tries to abort the mission before it even begins.

Your trainer shouts "go forward in ANY direction!" and you do just that.  As soon as the forward is established, power steering (who am I kidding, it's steering that is appropriate for my vague "let's go that-ish way" attitude) returns and I'm able to ride the course without a glitch.  Taking my leg off at the halfway distance and leaning up the neck could be considered a glitch, I suppose, but my horse jumped all the jumps so we can all pretend I rode beautifully.

Usually horse people talk about taking what they learned at home and applying it at a show.  This time, I took what I learned showing and applied it at home.  Mind-blowing, right?  TT Tucker is not so much a fan of trail riding alone.  We compare him to Mango from SNL because he has some very clear opinions about where we should and should not go and cannot believe anyone would question someone as clearly important as him.  So when I struck out on a trail ride alone after our week of showing, this was the look I got: 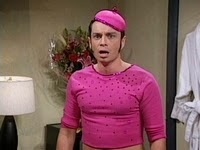 Things did not get off to a phenomenal start when three barns from home, I had to get off to fix a curb chain that had come unhooked.  Note:  getting on from the ground is not as easy at 34 as it is at all of the years that come before 25.  We were actually going along quite pleasantly when we ran across a woman on a horse acting much like an unhappy Tucker.  She asked to ride along with us until they got back to their barn and Tucker thought that was just swell.  She was so impressed with how well Tucker behaved, but I warned her once we parted ways she would see some fireworks and not to call PETA.  I don't think she believed me.
We said our goodbyes and got about 50 yards away when Tucker realized that we were supposed to keep going ALONE.  If I could sum up his reaction in words, it would be "oh, hell no."  A few weeks ago this would have turned into me waiting for another horse to come along but this time I took Paige's words to heart and went forward in any direction.  There were still some of Tucker's classic stand and spin moves, but once I made it clear we were going FORWARD, I became more in control of which direction we went.  Subconsciously on all of our other rides, I had been thinking "we are going to walk the way I want to go" instead of "we are going to GO the way I want to go, at whatever speed is required.
My next challenge came, oh, immediately when a group of riders walked by us and then trotted away 100 yards or so.  Tucker was not pleased but did the equivalent of keeping his mouth shut.  Then, they galloped back at us and past us in the other direction.  I picked up a brisk trot and although we may have been going sideways, we were going sideways the way I wanted to go.
Finally, we got to a crossing where you have to cross between two pillars designed to prevent golf carts from driving on the bridle paths.  Every single time we pass through one of these Tucker likes to pretend it is the gates to hell and I am an idiot for going through them.  Anyways, after this particular crossing was an apparently very sketchy-looking tree.  I decided that spooking qualified as a gait and embraced the fact that we would be going very forward for several steps.
Shortly after that, we returned home.  I felt far more victorious than I did at the show (I know, I wasn't exactly victorious there which may in part explain my sentiments) and celebrated with an ears shot. 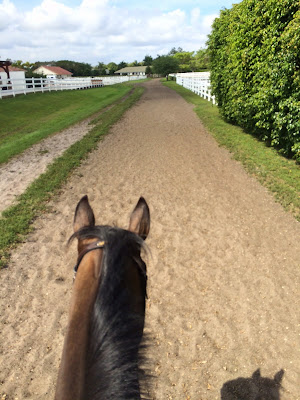 It was quite satisfying that someone else found our ride as exhausting as I did. 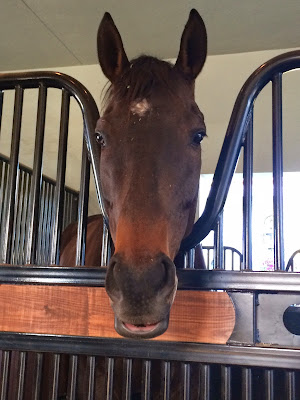